SEA PROJECT Symposium
How has Japan Engaged with Contemporary Art in Southeast Asia? Summary of the Symposium 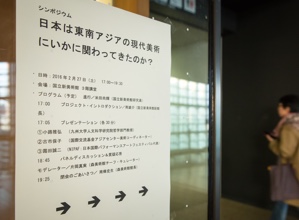 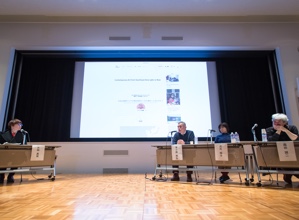 As one of the initiatives toward the exhibition on Southeast Asian art, scheduled to open in the summer of 2017, the Mori Art Museum, the National Art Center, Tokyo, and the Japan Foundation Asia Center organized the symposium to revisit how Japan and Southeast Asia had communicated (and still are communicating) with each other through the arts; to reflect on Japan’s role while Southeast Asia’s contemporary art scene was developing and to set up an arena for which to discuss how the accumulated experience and knowledge could be channeled and reflected into the exhibition-making process.

The first half consisted of the presentations by the three panelists. Prof. Masahiro Ushiroshoji introduced to us the long-running commitment in the research and cultural exchange projects in Asian art by the Fukuoka Art Museum (since 1979) and, later, the Fukuoka Asian Art Museum (since 1999) which succeeded the former museum’s engagements. Ms. Yasuko Furuichi presented on the Japan Foundation’s involvement in Asian art since 1990s when its ASEAN Cultural Center was established, and Mr. Seiji Shimoda, who had sparked the fire for performance art in Southeast Asia, shared with us the NIPAF’s projects since its establishment. As the research progressed for the SEA Project, the names of the three organizations appeared frequently in many of the conversations with artists, demonstrating their undeniable presence in Southeast Asia.

For the second half, a Q&A panel continued where members of the curatorial team joined in the discussion. 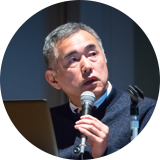 Professor, Faculty of Humanities, Kyushu University
Born in Fukuoka, Japan. Curated the first 4 editions of the Asian Art Show (1980 – 1994)――said to be the first contemporary Asian art exhibition――during his curatorship at the Fukuoka Art Museum. Continued to introduce modern and contemporary Asian art through exhibitions such as New Art from Southeast Asia 1992 (1992) and Birth of Modern Art in Southeast Asia (1997). In 1999, appointed Chief Curator of the Fukuoka Asian Art Museum and curated the 1st Fukuoka Asian Art Triennale 1999 (1999). Continued research on modern and contemporary Asian art since appointed professor at Kyushu University in 2002, all the while curating exhibitions such as Modern Paintings of Mongolia: Its Origin up to Today (2002), Cubism in Asia (2005), and 50 Years of Modern Vietnamese Paintings: 1925–75 (2005). Recently set up the AQA Project where he organizes exhibitions annually with his university students. Author of “The Other as the Lost Innocent Me: Gauguinism in Southeast Asian Art” (Bijutsu Forum 21, 2010), “The Diary of Luong Xuan Nhi: A Vietnamese Painters Journey to Japan 1943” (Tetsugaku Nenpo, 2010), “Art of Southeast Asia Under Japanese Occupation” (Tetsugaku Nenpo, 2013) among others. Lives in Fukuoka, Japan. 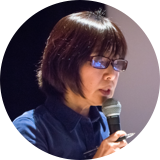 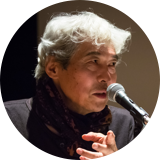 Founding Director, Nippon International Performance Art Festival
Born in Nagano, Japan. Artist and poet. Currently also lecturer at the Musashino Art University and Keio University. Began performance art in 1975 during enrollment at the Osaka City University, then, upon moving to Tokyo in 1977, began performance tours in Japan. Since his stay in Paris for three months in 1982 has annually participated in performance event in the U.S. and Europe. Founded NIPAF (Nippon International Performance Art Festival) in 1993 after organizing many art events in Japan, and, after multiple visits to Central Europe, extended his scope to Asia in the late 1990s. As well as participating in international festivals in over 50 countries, actively organizes performance art workshops to share with local artists the infinite possibilities in performance art. Received the prized Bessie Award (New York Dance and Performance) in 2000. Through 21 editions of NIPAF International Festival and 18 of NIPAF ASIA Performance Art Series, has presented the works of over 400 international and Asian performance artists from 50 countries. For 2016, he had organized projects in China and Bangladesh (April), Vietnam (May), and is currently working toward a project in Nepal (September). Lives in Nagano, Japan.

SEA PROJECT Symposium
How has Japan Engaged with Contemporary Art in Southeast Asia?